You guys know I like French na hehehe. Well lemme just say the only inspiration for this post is the picture below which was someone's dp a couple of weeks ago. So I composed a draft and kept the picture. Lol. Even if you are a Neanderthal that just crawled out, I am pretty sure the picture explains worraimean. 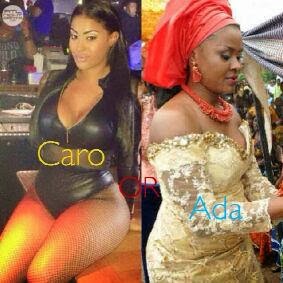 Ehen jare so when I first saw it I used it as my dp and wrote  'Which one are you ?'

All of my friends started pinging saying Ada Ada Ada. Yea right !!! Babes that when you see them you will just start whistling the song by reflex. Yeye babes.

To be honest I don't even like the Caro song. I like the Ada Ada way better. Not cos of the message but it just generally sounds cleaner. These days I can't watch a music channel for one straight hour. Call me whatever you want but all these videos/lyrics are just way too dirty for me mehn. By the time I watch three songs there's already something that is making me wanna change the channel.

But back to the matter which one is really better ? Back in our parent's days, it was the Adas that had it oh. A Caro did not stand a chance mehn. Even till now they still see it that way.

I remember my aunt who used to live with us and didn't get married until she turned 34. Absolutely sweet and delightful woman. She would give us sweets and all the things we were not allowed to eat before the folks came back at night. When she turned 30 , momsie's theory was that there was something wrong spiritually. Popsie said she must have been a Caro back then. Momsie vouched for her sister lol but when she turned 32 , momsie started to agree with the theory, especially since she had been praying for her since and there was no way God wouldn't have answered, if my dear Aunty hadn't offended the Lord.

'Afterall we don't know what happened when she was in school'. Ah ! see backstabbing sister.

Anyway her friends threw her a surprise for her 33rd when she met this dude who just came to visit his folks and who came by chance to pick his sister. They got married on her 34th and she moved to Yankee with him. Perfect Nollywood type story. She's got three kids now and we still keep in touch on facebook.

But the point is when it comes to these things I believe some people are just lucky. Y'all know of the popular Nigerian semi porn star who just got engaged. Meanwhile the Deeper Life Church off my street is full of chics in their thirties who do not miss any mid week program. Sometimes I wonder if they don't all go to work. Now I'm not saying some of these chics are not undercover Caros under the umbrella skirt and threaded braids oh. Yes they have skeletons in their closets but let's face it, a good number are actually good girls who are waiting on the Lord and the Lord alone and managing their 45k a month pay while some others are screwing their way to the top despite having an Aristo and a fiance on the side. Life is nowhere near fair.

I remember one of my rooms back in school. We were 5 - 2 Adas, 1 hybrid(or if you like Carad), and 2 Caros, and we would all preach to the Caros to change their evil ways as they would wear their heels and say goodnight while we tucked ourselves in after night devotion.

Caro 1 got engaged in final year and boyfie's dad sent her for Masters in Bradford during NYSC. She returned with her MBA and got NYSC certificate like the rest of us that served. Has a fat paying job now.
Caro 2 is also married. Funny story one day she had a fyt wit an Aristo over money and they ended up yelling and he chased her out of the car. She got down and slammed the door and he zoomed off. She kept walking(this was on Awolowo way Ikoyi at 11.30 pm and she was still coming to UNILAG). Someone parked beside her. She thought the man went to turn around. Alas it was this hawt fine piece of chocolate. She gave him a very stupid story which is subject for another post. Anyway he brought her back to school and the rest is history. They have a son now and yet he got her mom a car for her 50th. They have both moved to jand and refused to come back.
Carad just got married last month. She has a boring government job.
Ada 1 just got a boring job too. She does Iyanapaja to Ikoyi everyday on one yamayama salary. No toaster in the past 6 months.
Ada 2 yours truly can't complain but mehn this job won't do it for me very soon oh.

Summary is Caros can get lucky and Adas can get screwed over. You sef think of it. You know how many times you've seen those your friends who used to 'fire pass ferrari' at the airport or on instagram who look like they've got it all figured out and you ain't got squat. Like I said life is nowhere near fair and some people are just lucky.